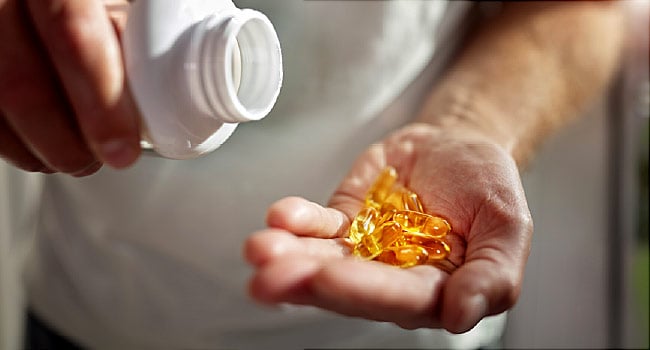 MONDAY, May 3, 2021 (HealthDay News) — Many people take fish oil to protect their heart, but a new study suggests that prescription versions may raise the risk of a common heart rhythm disorder.

At issue are prescription-strength omega-3 fatty acids, which are naturally found in fish oil. The medications are often prescribed to people with very high triglycerides, a type of blood fat linked to increased risk of heart attack and stroke.

According to the American Heart Association, prescription omega-3s can lower triglycerides by 20% to 30% in most people.

But the medications are also controversial, because their ultimate benefits for the heart are unclear.

Now the new study — an analysis of five past clinical trials — suggests caution is in order. Overall, trial patients given omega-3s were over one-third more likely to develop atrial fibrillation (a-fib) than those given a placebo. The fish oil doses taken ranged from 0.84 grams to 4 grams per day.

A-fib is a common heart rhythm disorder, or arrhythmia, in which the heart’s upper chambers begin to quiver chaotically instead of contracting effectively.

A-fib is not immediately life-threatening, but it’s “not benign,” either, said Dave Dixon, one of the researchers on the study and an associate professor at Virginia Commonwealth University (VCU), in Richmond.

Over time, Dixon said, a-fib can lead to complications like heart failure or stroke.

Exactly how prescription-strength omega-3 could contribute to a-fib is unclear, according to Dixon.

However, the increased risk was fairly consistent across the trials — more consistent, in fact, than heart benefits were, said co-researcher Salvatore Carbone, an assistant professor at VCU.

In all five trials, there were more a-fib cases among omega-3 patients than placebo patients, though the difference in risk was not statistically significant in all studies.

But when the researchers pooled the results of all five trials, there was a clear result: Omega-3 patients were 37% more likely to develop a-fib than placebo patients were.

In contrast, only one trial showed that an omega-3 product could cut the risks of other heart conditions.

Why has only one trial found heart benefits? Again, it’s not yet clear, Dixon said.

But, he added, Vascepa is different from the fish oil products tested in the other trials. It contains only one omega-3, called EPA, while the other products contain a combination of EPA and DHA.

And in the REDUCE-IT trial, Dixon said, higher levels of EPA in patients’ blood correlated to lower cardiovascular risks.

That hints, he said, that focusing on EPA might be “the way to go in the future.” But the conflicting findings on the benefits of omega-3s — along with the potential risk of a-fib — highlight the need for more studies, the researchers said.

The analysis was published April 29 in the European Heart Journal — Cardiovascular Pharmacotherapy.

Findings on the heart benefits of fish oil have indeed been “inconsistent,” said Linda Van Horn, a member of the heart association’s nutrition committee and a professor at Northwestern University Feinberg School of Medicine, in Chicago.

Read More:  What are diet questions

“There are limited and inconsistent data regarding the benefit or risk of taking fish oil supplements,” Van Horn said.

So the heart association recommends eating two servings of fish a week instead. Van Horn said that fatty fish, such as salmon, trout, albacore tuna and herring, are the best sources of omega-3s.

The trials in the current analysis tested prescription-strength omega-3s. But Carbone said he would be cautious about over-the-counter fish oil supplements, too.

“We don’t know if over-the-counter products could have these same effects,” he said.

Over-the-counter fish oil is considered a dietary supplement, so it is not regulated by the U.S. Food and Drug Administration as a drug would be, Dixon pointed out.

Both he and Carbone said it’s best to talk to a doctor or pharmacist before starting any fish oil product — and that people on prescription omega-3s should speak with their doctor before stopping.