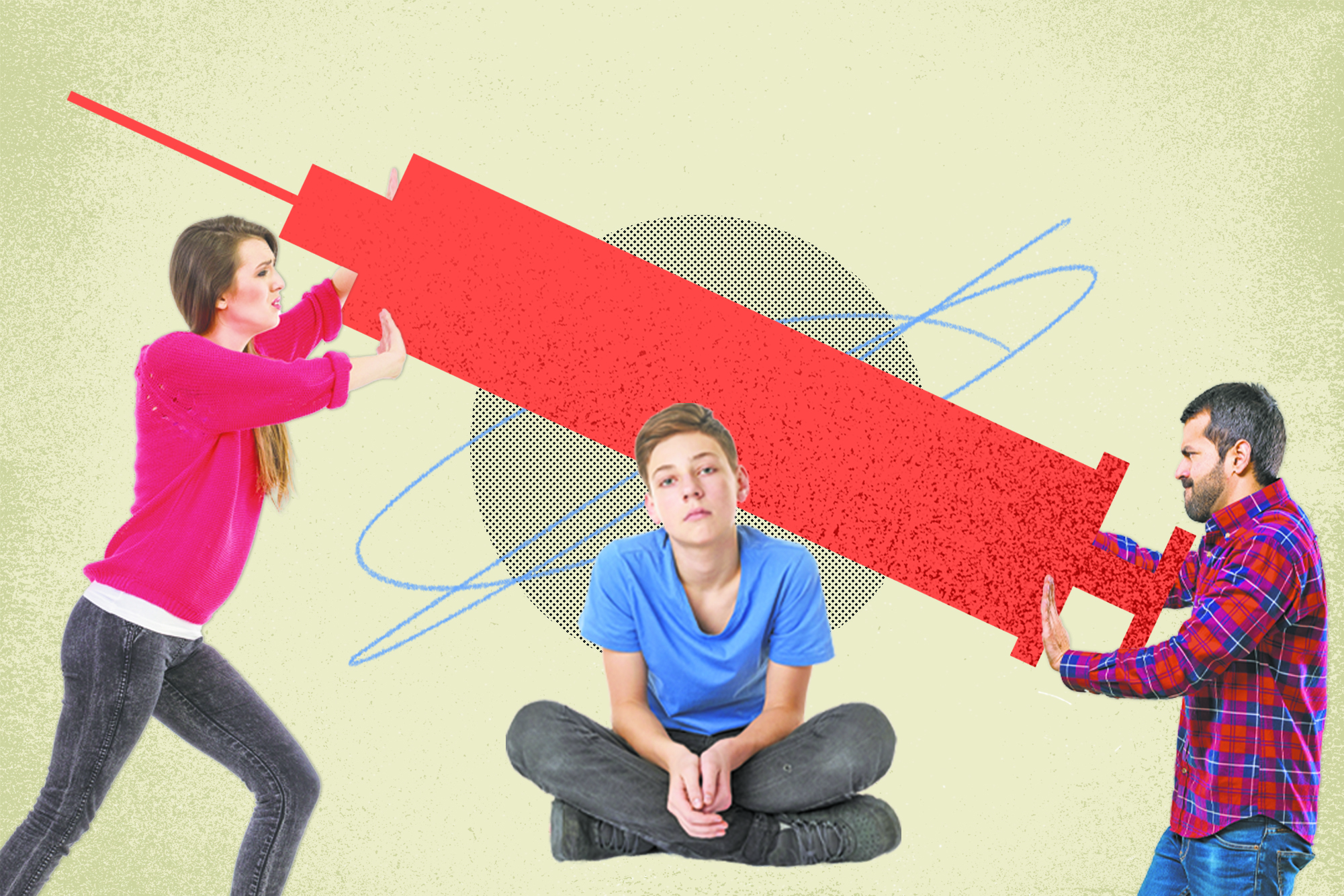 Shuli, a 15-year-old New Yorker, had a dilemma on his hands when the COVID-19 vaccine was approved for his age group.

“Mom is very much pro vaccine; my dad is very anti-vax,” the high school freshman, who asked to withhold his last name for privacy, told The Post. “He kept telling me, ‘Don’t get the shot.’”

So when his mom, Elisheva, who has full custody, gave him the freedom to choose whether or not to get the jab, Shuli opted for the shot before school started. “My school is really cool about it,” Shuli said. “You can’t play sports or do extracurriculars [if unvaccinated], but everyone I know is vaccinated. They have vaccine clinics in the school and health care workers who will come talk to you if you’re afraid of getting vaxed.”

But since straying from his dad’s advice, Shuli has gotten the cold shoulder. “He’s still furious with me,” said the Upper East Sider. “It’s a permanent rupture — I don’t think our relationship can be repaired after this.”

Despite the family fallout, Shuli said getting vaccinated was the right choice. “I get to have a social life and interact with people, go to movies and restaurants — as well as keeping other people safe and no one catching the virus because of me. I’d say that’s worth it.”

For divorced parents, the issue of getting their kid vaccinated has thrown a wrench in otherwise amicable relationships. When the FDA approved emergency use authorization of the Pfizer vaccine for children 12 to 15 in May, a fresh wave of legal issues bubbled up. Former couples who have joint custody found themselves bitterly divided over their children getting the jab, sending them to court in the hopes of winning sole medical decision-making rights.

“The big issue now is that divorced couples are having this issue post-divorce,” said Carly Krasner Leizerson, a matrimonial and family lawyer in NYC. “For families with joint legal custody, that means joint decision-making over major decisions for their children, including medical decisions.”

Getting adolescents vaccinated “is a polarizing issue. This is not something that can be compromised, like which camp the child attends,” the lawyer continued, adding that she thinks more legal woes will emerge among parents when younger kids become eligible for the vaccine.

Tensions are already leading parents to wonder if they have cases against their exes on the other side of the vax debate. One Upper East Side mom was livid when her ex-husband vaccinated their son, who just turned 12, without her consent. “My ex wanted him to be vaccinated. He didn’t care what I thought,” said the 40-year-old, who asked to remain anonymous for the privacy of her kids. “I’d like him arrested — that’s child endangerment.”

She contracted the virus herself since being fully vaccinated, and she worries about the vaccine’s long-term effects, including on her son’s fertility. (Krasner Leizerson, who is not connected to this case, said that this likely wouldn’t be considered child endangerment. “The issue is a breach of the parties’ custody agreement by making a major medical decision for a child without joint agreement of the parties,” she said.)

Krasner Leizerson is currently representing a client in court who wants his 14-year-old freshman daughter to be vaccinated, while his ex-wife strongly opposes it.

The parents, who settled their divorce outside of court about four years ago, lived amicably, sharing birthdays and holidays together. “It was a model co-parenting joint divorced family,” said Krasner Leizerson. “And now they find themselves in court on this issue.”

The lawyer doesn’t think the ex-wife has any case. “The child’s pediatrician and their parent coordinator have recommended the child get vaccinated. The father is essentially asking the court to give the father the right to vaccinate the child and give the father sole decision-making with respect to medical decisions for the children going forward because of the mother’s poor judgment and refusal to follow the advice of the child’s doctor in this regard.”

The girl’s vaccination status also has other ramifications, the lawyer said.

While NYC public schools don’t mandate the shot for its some 1 million students, and about 65 percent of city residents are fully vaccinated, private school vax rules can make or break a child’s school experience.

“There are serious social implications for the child — she’s the only girl in her grade who’s not vaccinated,” said Krasner Leizerson of her client’s child, adding that the kid’s private school bans unvaccinated students from participating in sports teams, clubs and overnight field trips. The unvaccinated wear a “different type” of mask and have to eat their lunch outside — for now. “You’re made a pariah,” said the lawyer, noting that the child wants the shot. “She wants to be on teams and in activities.”

Amanda Uhry, founder of Manhattan Private School Advisors, underscores that being the odd one out when it comes to vaccination is social sabotage. “You don’t want to be the unvaxed kid in a private school,” she said. “There’s bar mitzvahs, parties, weekends away in the Hamptons. Parents don’t want kids who aren’t vaccinated around.”

Indeed, Elisheva said that in addition to the health benefits, one of the reasons that she was glad Shuli decided to get vaxed was so he’d be safe to participate in activities with friends. After more than a year of the emotional trauma caused by the pandemic, she said, “to put them in a situation again where they’re isolated — from friends and social activities — is just crazy.”